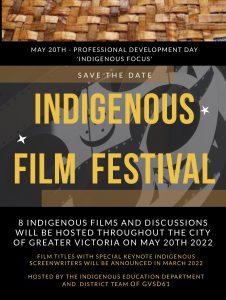 The SD61 Indigenous Education Department and SD61 District Team will host a one day Indigenous Film Festival for all staff in the Greater Victoria School District on professional development day May 20, 2022. We are showing films at different venues throughout the city and each location will have a facilitator and guest to introduce and debrief the films.

Twelve-year-old Beans is on the edge: torn between innocent childhood and reckless adolescence; forced to grow up fast and become the tough Mohawk warrior she needs to be during the Oka Crisis, the turbulent Indigenous uprising that tore Quebec and Canada apart for 78 tense days in the summer of 1990.

Filmmaker Tracey Deer is a Mohawk filmmaker with multiple credits to her name, as a producer, writer and director. She currently resides in Kahnawake, her home reserve in Quebec.

FIRST DAUGHTER AND THE BLACK SNAKE

The “Prophecy of the 7th Fire” says a “black snake” will bring destruction to the earth. We will have a choice of two paths. One is scorched, and one is green. For Winona (Ojibwe for “first daughter”), the “black snake” is oil trains and pipelines. When she learns that Canadian-owned Enbridge plans to route a new pipeline through her tribe’s 1855 Treaty land, she and her community spring into action to save the sacred wild rice lakes and preserve their traditional indigenous way of life. Following her decision to fight Enbridge, Winona dreams that she is riding her horse against the current of the oil. Launching an annual spiritual horse ride along the proposed pipeline route, speaking at community meetings and regulatory hearings. Winona testifies that the pipeline route follows one of historical and present-day trauma. The tribe participates in the pipeline permitting process, asserting their treaty rights to protect their natural resources.

THE MAKING OF THE WITNESS BLANKET

Inspired by a woven blanket, this large-scale art installation is made from hundreds of items reclaimed from residential schools, churches, government buildings and traditional and cultural structures across Canada. The process of gathering these objects and their stories took artist Carey Newman and his team from coast to coast to coast. They traveled over 200,000 kilometers, visited 77 communities, met over 10,000 people, and welcomed over a thousand objects into their care. The makers of the documentary have made it freely available online to share the power of storytelling and testimony during a time of fear, uncertainty and social isolation. They invite you to bear witness. This film shares traumatic stories of Indian residential school survivors. Please watch and share with gentleness.

1491: THE UNTOLD STORY OF THE AMERICAS BEFORE COLUMBUS

Based on the New York Times bestselling book by Charles C. Mann, 1491: The Untold Story of the Americas Before Columbus is a groundbreaking docu-drama series that redefines the history of Indigenous people of North, Central and South America. Told entirely through the voices of Indigenous scholars and cultural leaders, and illustrated with authentic dramatic reenactments, 1491 presents a compelling narrative of the development of Indigenous peoples and societies over a 20,000-year time frame. 1491 brings to life the complexity, diversity and inter-connectedness of Indigenous peoples in the Americas before the arrival of Columbus. Presented from an Indigenous-perspective through an artful blend of documentary and scripted drama, the series takes its audience on an unforgettable journey.

Over the course of eight hours, the origins and history of ancient Indigenous societies in the Americas are interpreted by leading Indigenous scholars and cultural leaders in the fields of archaeology, art history, ethnology, genetics, geology and linguistics. Each episode includes a five minute scripted dramatic scene that portrays a significant moment in the history of an Indigenous nation. These theatrical-style scenes will establish the episode’s theme and provide the audience with a deeper understanding of convergence of the pre-contact worlds of Indigenous peoples.

Examining the story of Cowichan Chief Tzouhalem through accounts from both historians and First Nations elders, and how he subdued his rivals and transformed himself into the most powerful First Nations leader in the Pacific Northwest.

After the Haida were forced, by disease, to abandon some 35 of their ancient villages, their islands became a paradise for the relic hunters of the early 20th century, greedy for the totem poles and masks that were – and are – desired by museums all over the world. Unbeknownst to the Haida, these adventurers also dug up graves and looted mortuary poles, taking away hundreds of skeletons to be used in a bizarre and ultimately futile scientific quest. Not until the early 1990s did the young people of Haida Gwaii learn that the remains of their ancestors – along with more than 100,000 from other tribes — were in museum basements. When they found this out, they decided to do something about it. STOLEN SPIRITS OF HAIDA GWAII follows the Haida through a fascinating process of relearning their culture and an incredible journey which takes them to Chicago and, ultimately, to a reconciliation with the descendants of the scientists who robbed the islands’ graves a century ago.

The Road Forward, a musical documentary by Marie Clements, connects a pivotal moment in Canada’s civil rights history—the beginnings of Indian Nationalism in the 1930s—with the powerful momentum of First Nations activism today. The Road Forward’s stunningly shot musical sequences, performed by an ensemble of some of Canada’s finest vocalists and musicians, seamlessly connect past and present with soaring vocals, blues, rock, and traditional beats. A rousing tribute to the fighters for First Nations rights, a soul-resounding historical experience, and a visceral call to action.

THE RAISING OF THE OAKLANDS SCHOOL POLE

Hands On, Hearts On: The Oaklands Totem Legacy project celebrates community and honours Indigenous Knowledge. This film documents the creation of the Oaklands Elementary School Totem Legacy Project, the pole that was carved by Carey Newman, Kakwaka’wakw and Coast Salish artist and his assistant, Tejas Collison in 2018.

Adapted from Naomi Fontaine’s acclaimed novel, Kuessipan is Myriam Verreault’s first narrative feature. In a Quebec Innu community, Mikuan (Sharon Fontaine-Ishpatao) and Shaniss (Yamie Grégoire) struggle to maintain their close friendship when they clash over their diverging ambitions. When Mikuan falls in love with a white boy and starts to consider a life beyond their tiny reserve, her bond with Shaniss and her family is put to the test. A coming-of-age story told with humour, tenderness, and heartbreak, Kuessipan is a poignant exploration of evolving friendship and dreams, and the bonds that will forever root us in our culture. Kuessipan is told through an Indigenous lens yet remains relevant to us all as we discover the power of community — along with the individual strength it takes to follow our own path.

In this era of “reconciliation”, Indigenous land is still being taken at gunpoint. INVASION is a true cinematic experience about the Unist’ot’en Camp, Gidimt’en checkpoint and the larger Wet’suwet’en Nation. Michael Toledano and Sam Vinal capture these communities standing up to the Canadian government and corporations who continue colonial violence against Indigenous peoples.